The physiology of response to threat among animals and human beings.
Real violence will often begin with an attack on the mind which triggers an emotional response.

Our survival mechanism is connected to what is called the autonomic nervous system(ANS); this system controls all voluntary and involuntary functions.
The ANS operates automatically, whiteout our control and is the source of our survival responses (Ref. 14). 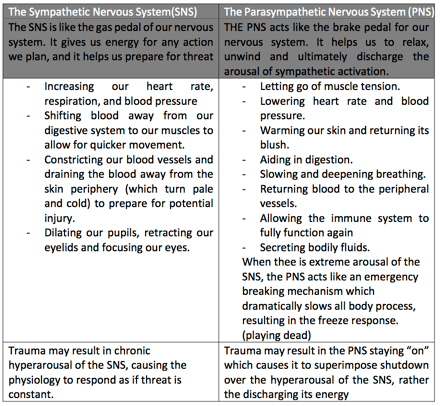 To show what happens in the body, a critical situation is described with the changes in the hormone system and brain, the heartrates descried is hormone activated and is not equivalent to exercise.

Code Yellow:
Imagine that you a sitting in your sofa and the hear a sound. The hearing is directly connected to the amygdala, the fear- guard dog of the brain. Is the sound known or maybe a threat? The action is instant; speed is the essential for survival.
The defensive orienting response sets in, you look around and the heartbeat raises from 60 beats/minute to 90 beats /minute(bpm).
This reaction is 1. Degree stress (Ref. 15).

Code Red:
If the sound is threatening, then the sympathetic nervous system will prepare you for danger. Heartbeat will raise to around 120 bpm.
It is a man bye the door, you don’t him and try to communicate with him. If he just is lost and ask for direction, then SNS will adjust the heartrate down again.
If the man pulls out a knife and there is no escape, a chemical process is started by SNS. Adrenalin, noradrenalin and cortisol is produced and the SNS system is further activated.

Now you will, very quickly, evaluate if you must fight him or run. The pulse raises to the range from 145- 180 bpm. You will function normally around 115 bpm, above the fine motor skills will no longer work. The range around 145-175 bpm is optimum for fighting.
This is the 2. Degree stress.
If the danger is over, the PNS will discharge your system. This will take many minutes.

If the danger continues and you are successful in your fight or flight, then there will also be a discharge. You will tremble /cry when in a safe location to reset your system, this is normal and healthy. The animals do the same.

Code Black:
If your heartbeat raises to over 180 bpm you will go into the grey or black zone. Cognitive processing deteriorates and perceptual distortions can appear.
If there is no way out, if you can’t fight or flight then you can end in freeze. Both SNS and PNS is working overtime causing a collapse in your system. The hormone vasopressin is produced which will make the pulse drop fast to 30 bpm and you will be dissociated in a frozen state. Other hormones are released that kills pain and solidifies wounds.

This is the last defend mechanism of our body, the body is like a zombie and wold look dead for an animal or other threat.
Recovery from this state depends of the situation, if it happens then you would need professional help from therapist that are skilled in somatic experience or other specialists in trauma healing.